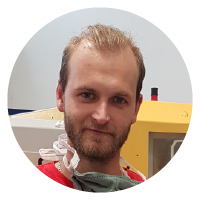 My name is Petr Koryťák, I live in Přimda in Tachov and now I am supported by the sale of protective shields. I got into business by coincidence. Since I own a 3D printer, I started printing headbands on protective shields like almost every printer in the Czech Republic who wanted to help in the situation connected with the COVID-19 epidemic. I took charge in Tachov and supplied polyclinics, towns and everyone who needed to supply protective equipment entirely from my own resources. Due to the acceleration of printing, I modeled my own headband, which I got for 1 hour 30 minutes for two pieces, which was a pretty good time. The headband is lighter and more comfortable on the forehead.

Due to the growing demand and inquiries for the supply of hundreds of pieces of shields, not only in the Tachov region, but from all over the Czech Republic, I was forced to think about it a bit and change production. One day, Mr. Šmejkal (executive of a plastic injection company) contacted me with an offer to rent the space I was looking for for the assembly and packaging of 3D shields. Since I already had the space solved, Mr. Šmejkal turned the letter over and offered me the opportunity to cooperate: “How about not doing one headband for 45 minutes but 40 seconds”. Well, it was almost decided. Pressure from desperate people who needed more and more pieces convinced me that it was necessary to produce faster and more pieces.

The most difficult thing for me was arranging the necessary formalities with the authorities, which have limited traffic. Waiting for VAT registration, which takes a month, but I need it now and other minor complications with processing to start in business. Despite the fact that demand was so high, I was afraid that the investments that had to be made before would not return. The hardest part about starting was the realization of inexperience. Going into business with someone I don’t know. Combine time with work and family. This is probably the case at the beginning of every business, I also spent tons of hours a day starting a new company.

The company that made the mold for us promised to make it cheaper. After the mold was in operation, the invoice was 30,000 more expensive than the previously agreed price. This is called sharing. But because we were pressed by time and production, there was nothing we could do and just pay it. Unfortunately, there was no better solution to avoid any time delays.

Due to high demand, we started to produce and sell as quickly as possible, we focused mainly on the dispatch of orders. But the beautiful feeling was when you count how many pieces you shipped in a short time. Then one realizes that it makes sense.

Plans for the future? Don’t stay with the shields. Now I am modeling other protective aids that could be included in the offer.
My goals include exporting to the whole of Europe and, if possible, overseas. If I may add, I would like to thank everyone who helped me in the beginning with every valuable piece of advice and help – SIT Port, the law firm, the accountant and other people around me.